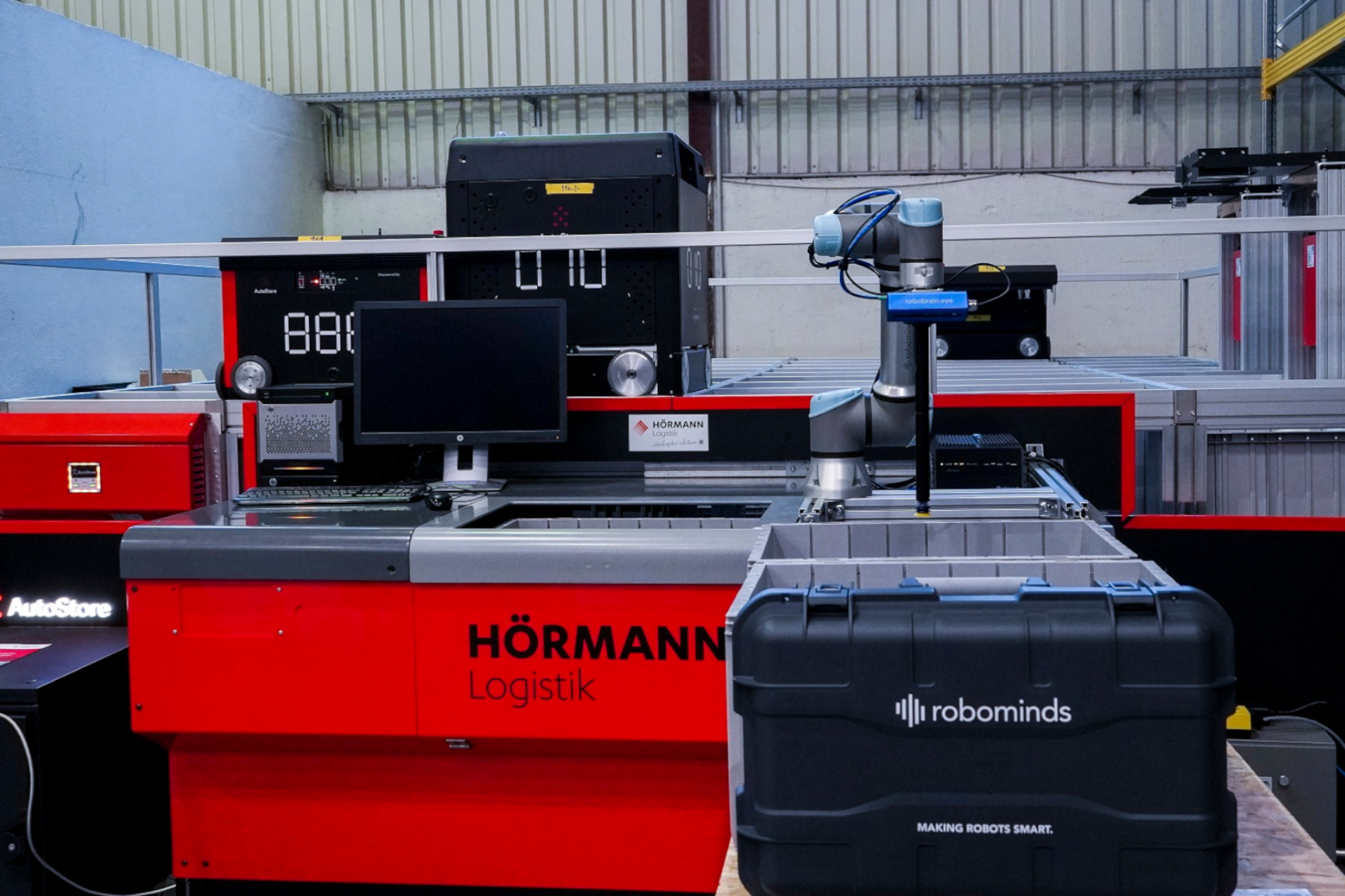 By inventing its patented robobrain® solution, our partner robominds created a modular process intelligence platform entirely based on artificial intelligence. Smart software modules and state-of-the-art hardware components make up a unique system for tailored Pick-by-Robot order picking as an add-on to an AutoStore® system for example.

Benefits of Pick-by-Robot with AI

Pick-by-Robot is a technology for handling order picking processes – fully automatically. The robot relieves human order pickers of the task of collecting the articles needed for one or several jobs.

Order picking robots and their role in logistics

The emergence of Industry 4.0 was the final step of firmly rooting robots in industrial economies. Before that, they were mainly used as mechanical production aids but hardly ever occurred in logistics. But this innovative technology adds real value, particularly when it comes to simple and repetitive order picking activities.

Order picking robots are the perfect choice for multi-shift operation. A Pick-by-Robot system such as robobrain’s® solution directly receives  stock  from the warehouse via an automated conveyor system, to be presented at the order picking station. In the process, the robot picks items from a source bin and places them in one or several target bins.

Instead of having an order picker or warehouse worker pick items from the correct bin or handling device (picking process), Pick-by-Robot is a fully automatic order picking concept.

The robot’s swivel arm and the corresponding gripper attached to it pick the items from the source bin and transfer them to the target bin. The Warehouse Management System at the line or factory level assigns picking orders to the order picking robot.

The flexible swivel arm is at the heart of the Pick-by-Robot hardware. Its mechanical force, simple programming, speed, ergonomic design and integrated camera enable it to complete all order picking jobs. Different gripper tools (parallel pick) or the vacuum picker make the robot fit for multifaceted applications.

Its robobrain-eye optically supervises the processes, while the award-winning robobrain.vision adds an industry-scale 3D camera for perfectly coordinating the robot’s optical and manual elements without any previous teach-in sessions. This is the future of smart picking.

Benefits of our HiLIS Pick-by-Robot solution:

Hand-eye coordination is one of the most complex of all robotics challenges. What humans consider a matter of course and learn during their first year of life, robots find it very hard to come to grips with.

Artificial intelligence and complex vision algorithms enable robobrain.vision to master this particular task. The camera attached to the swivel arm detects any object and automatically identifies the points at which to perfectly pick up the article.

robobrain.control provides you with intuitive, smart and simple control over your robot. A user-friendly control interface lets you combine several instructions into a single task which you then drag and drop onto the flowchart. robobrain.control even allows you to control several robots of a station at the same time – independent of the interface.

While robotic solutions are steeply on the rise in general, they are not widely used for small-parts picking as yet. The simplified technology, intuitive operation, flexible interaction and an interface perfectly adapted to robominds’ robobrain solution turns our innovative WMS HiLIS RoboPick into a future-proof order picking system for intralogistics.

Its swivel arms can be set up rapidly, can be operated without in-depth programming experience, are scalable and retrofitted easily.